2% VAT Reduction Discount
The discount is automatically deducted in your shopping cart. Details of this here: VAT-Reduction-Discount
Cookie preferences
This website uses cookies, which are necessary for the technical operation of the website and are always set. Other cookies, which increase the comfort when using this website, are used for direct advertising or to facilitate interaction with other websites and social networks, are only set with your consent.
Configuration
Technically required
These cookies are necessary for the basic functions of the shop.
"Allow all cookies" cookie
"Decline all cookies" cookie
CSRF token
Cookie preferences
Currency change
Customer recognition
Customer-specific caching
Individual prices
Selected shop
Session
Comfort functions
These cookies are used to make the shopping experience even more appealing, for example for the recognition of the visitor.
Note
Statistics & Tracking
Affiliate program
Google Analytics
Track device being used
Categories
Information 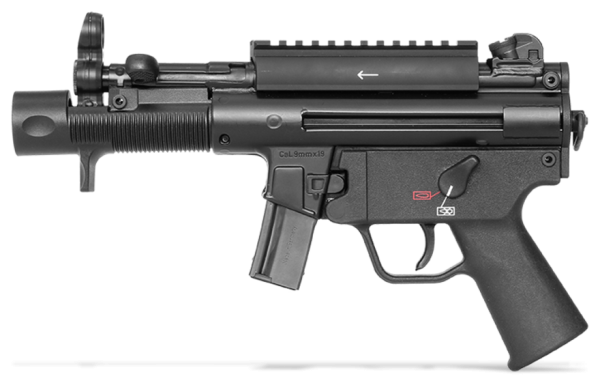 Currently not in stock - pre-order now


Apart from statutory changes inside the weapon the SP5K is absolutely identical to the MP5K, particularly the interfaces for magazine, buttstock/receiver cap, handguard and sight mount. In conjunction with extensive accessory options the SP5K is a state of the art weapon system. In addition to the quick release Picatinny mounting rail and the slim line handguard with HKey mounting slots available as accessories is as natural as a buttstock support option and the ambidextrous operation of the weapon. The SP5K can be universally used both as a pistol or a shoulder-mounted weapon.

Heckler & Koch is one of the world's leading manufacturers of small arms with firmly established roots in Germany. For more than 60 years, the company has been a reliable partner to security forces, the police and special forces of NATO and NATO-associated states.